Recently we held a surprise anniversary party for my in-laws upcoming Ruby Wedding anniversary. As it was an afternoon tea party, cakes featured heavily! But I didn't want to just make cakes, so my sister in law made a load of gorgeous little sandwiches, and I made these incredibly easy cream slices too. They went down a treat, in fact the raspberry cream slices all disappeared, and there were just a few blueberry slices left. 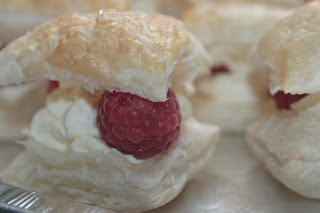 For the filling:
A large carton of double or whipping cream
Fresh fruit of your choice

Preheat your oven to 180C.
Sprinkle flour on your rolling surface.
Roll out the puff pastry to around half a centimetre thick. Then simply cut into 5cm squares. You can re-roll the trimmings once or twice, but after that the pastry will not puff as well and will become tough.
Place on a baking sheet and brush each square with a little beaten egg, then sprinkle a small pinch of sugar over the top.
Bake for around 10 minutes or until puffed up and golden brown. When done, immediately remove to a cooling rack.

Whilst the puffs are cooling, whisk the cream to stiff peaks and pop it into a piping bag with a large nozzle. (If you don't have a piping bag, you can use a knife or pallette knife to spread it instead).

When the puffs are cooled, gently ease the tops off each one. They should be easy to split open like this.
Then pipe or spread the cream inside, top with the fruit of your choice, and place the lids back on.

See, how easy is that?? The hardest bit is splitting the puffs open, and that's really easy! You can even make the puffs (but don't fill them) the night before, just make sure you put them in a tin (not plastic tub) which will help keep the pastry fairly crisp. And feel free to experiment - flavour your cream with vanilla or rose essence, use sliced peaches instead of berries, mix chocolate ganache with the cream, drizzle the tops with runny icing, dust with icing sugar or edible glitter...go mad.
Posted by the boy's behaviour at Monday, September 03, 2012

Newer Post Older Post Home
Subscribe to: Post Comments (Atom)
Welcome to my blog about the things I make - cakes, bakes, family food, and sometimes crafts that I've made or made with my children.