Alright I'm sorry. I haven't posted since January, that's awful isn't it? No excuses...just life's been getting in the way of this blog...and so has the main blog I write - The Boy's Behaviour.

But, I do have some things to share...so without further ado - 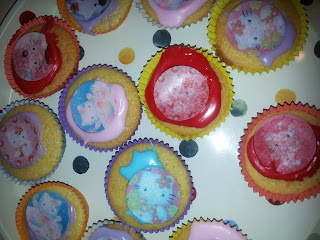 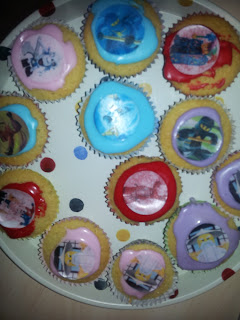 Yes, there are plenty of cupcake recipes out there, including on this blog, but this is the simplest, easiest recipe and this time my kids (aged 6 and 2) made cakes almost entirely by themselves (with the help of my trusty mixer). They measured everything between them, they cracked the eggs (into a cup first to check for bits of shell), they poured things into the mixer, turned it on, put the cases in the tins, and spooned the mix in. They iced and decorated them and then ate them!

This recipe made 12 fairy cakes AND 12 cupcakes - so small and large cases. And it's in ounces because that's the easiest way to remember it:

For the icing:
Icing sugar
A little water
Food colouring

In the mixer, cream together the margarine and sugar til fluffy. Add one egg, then a spoonful of flour, mix until combined. Repeat for the other eggs, then finally add the remaining flour. Mix until smooth and incorporated.

Divide the mixture evenly between the cases and then adult's job is the put the cakes in the oven. The fairy cakes will take around 12 minutes, the cupcakes nearer 15minutes. Remove from the oven and put the cakes on a rack to cool.

Once the cakes are cool, add a dribble of water to a bowl of icing sugar, remember that liquid food colouring will also make your icing runnier. (I prefer to use gel colours).

Then decorate! The best thing about these particular cakes are the toppers, which are pictures printed onto rice paper, bought from Ebay. I got Hello Kitty toppers for Dollop, and Lego Ninjago for Mini - they both declared them the best cakes ever! 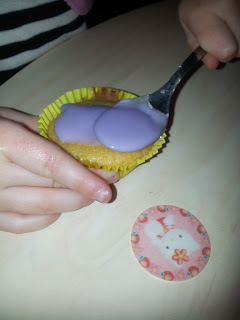 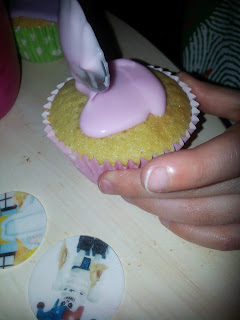 Add comment
Load more...
Older Post Home
Subscribe to: Post Comments (Atom)
Welcome to my blog about the things I make - cakes, bakes, family food, and sometimes crafts that I've made or made with my children.